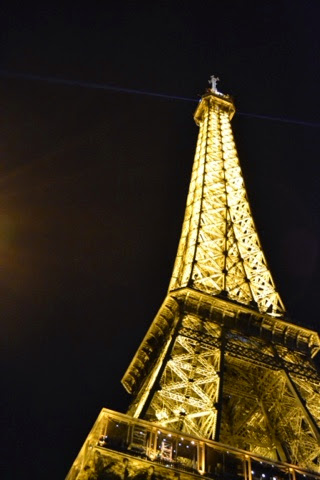 Paris is known as a city that doesn’t sleep, there is an ebb and flow to Paris that can be a little daunting to the novice traveler. Hopefully my post will help some of you ( if there are any readers, that is) in some of your travels down the road, should you ever find yourself travelling in Paris.
We booked our air passage with Air Transat, and arrived in Paris at around 10am on Sept 30th. The flight was approximately 7 hours long and landed at Terminal 3, Charles De Gaulle airport just outside of Paris. We had already booked a stay Hotel Astrid in Paris, however we had not booked transport from the airport to the hotel.
We had done some research prior to our trip to determine what mode of transport would best suit our needs. My wife and I discovered that there were 3 main methods of transport that would get us into the heart of Paris.
Taxi – this method was the almost the most expensive, however it appeared to be fairly quick. approx 45.00 euros
Subway – subway was the cheapest and the fastest, however with security concerns and and commuter crowds and us trying to weave our way in and out of subway cars with suitcases,  this didn’t seem to be a method that we wanted to take.
Airfrance – Les Cars – this mode of transport is a dedicated bus route between both of the Paris airports. It runs continuously between the Orly and Charles de Gaulle airports on 4 lines and starts at 0530 with a run every half hour or so. Each line has about 2 stops that are in the heart of paris at various locations. 16.20 euro per person one way. Total cost for us was about 48.00
We opted for Les Cars, at 16.20 euro, one way, this method  seemed most economical for our purposes and one of the stops was on the same street as our hotel. It seemed easy enough …
When we reached CDG airport in France it wasn’t as straight forward as it seemed online. We arrived at terminal 3 of CDG.. The posted signs, and from what indications were on the CDG website Les Cars had a pick up point at terminal 3,  however the posted signs at terminal 3 were not very helpfully as to what the pick up location was. Turns out the Les Cars pick up point was located at terminal 1 so we had to make our way over to Terminal 1. The trek to terminal one was a bit of a walk. We asked for directions at an information desk and they pointed us into the direction of the Les Cars ticket booth.
Once we figured out where the stop was, we had to purchase tickets. This is where a costly mistake was made by yours truly. I ended up purchasing the wrong tickets for the wrong bus line. It was a 37.00 euro mistake. The tickets were purchased from an automated machine so they could not be readily returned. Once I determined that tickets could be purchased directly from the driver things went a little better.
Once we got on the bus the trip form the Airport to the hotel to took about an hour, mostly because the traffic was not bad at all, we arrived after rush hour traffic. There were not many travellers on the bus so it was not crowded, and a relatively pleasant ride. We arrived at our stop that was on the same street as our hotel, so that was helpful, it was a short walk from the stop to the hotel.
In hind sight, when we left our hotel at the end of our stay, we had the hotel staff arrange a taxi to Orly airport. If I had to chose between the Les Cars  and the taxi, at possibly a higher price, I would chose the taxi because of convenience especially when traveling with more than 2 people.  The taxi brought us directly to departures terminal.

Follow my journey and let the world be our playground!